Ants can move nutrients from one area to another in the forest. When ants build their homes inside a plant, does the food they carry and store also help the plant?

Bromeliad: a type of flowering plant that grows on the surface of other plants or objects, without taking nutrients from the plant or object.

Epiphyte: a plant that grows on another plant or object, without stealing its water or nutrients.

Humidity: a measure of the amount of water vapor (the gas form of water) in the air, with more water creating more humid air.

Isotope: one of the different forms of the same element, that all have differing masses. For example, carbon generally has an atomic mass of 12 (12C), but heavier carbon exists naturally, as 13C and 14C.

Nutrient: a vitamin, mineral, or chemical in food that the body uses to grow, repair, or do work… more

Translocate: to move to a new place. 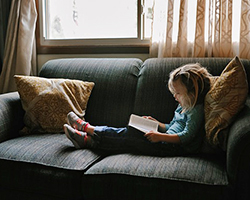 What if food was just brought to you in one spot, on a regular schedule, and you wouldn’t have to move or ask to get it?

You walk through the door after soccer practice, and collapse on the couch. You’re so tired, you just want to lay there, but your tummy starts to rumble. You wished someone could bring you your favorite snack. Wouldn’t it be amazing if your food was delivered to you without you moving, or even asking for it?

For humans, most can only dream of such a wish. However, this does happen in some situations in real life. Some flowering plants, called bromeliads, might have food delivered directly to them by an animal—an ant!

Some bromeliads function as a home for ants. The ants go and collect nearby food and bring it back home, into the bromeliads. Is this food delivery system helping the bromeliad? Well, that might depend on what kind of food the ants bring back.

In the PLOS ONE article, “Species-Specific Effects of Ant Inhabitants on Bromeliad Nutrition ”, scientists tested how ants and their diet can affect the health of bromeliad plants.

How Do Epiphytes Eat? 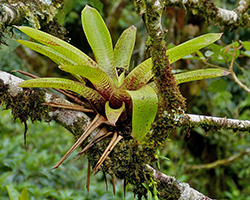 Epiphytes are plants that grow on other objects for support.

Bromeliads are a type of flowering plant. Most of them are epiphytes, meaning they live on other objects for physical support. Epiphytes can grow on the ground, but they can also grow on the surface of other plants, including trees. Epiphytes don’t parasitize the plants they grow on, but may grow there for support, and for different light and humidity conditions.

Some bromeliads, like other epiphytes, get their food and water from the air, rain, and debris that collects around them. The leaves of some bromeliads have short, small hairs, which act like little fingers to help get water and carbon from the air around the plant.

Bromeliads get other nutrients from dead leaves and debris that collect in their water pools. Bromeliads have roots too, but their roots are mainly used to hold on to surfaces.

Ants and Bromeliads: A Mutual Benefit?

Some ants and bromeliads share a relationship in which they each depend on the other. Bromeliads provide shelter for ant colonies. There are empty spaces in the base of leaves in some plants, and others have tangled roots that create small spaces. These make great places where ants can build their homes. In return, bromeliads can get extra nutrients from the ants when they bring food back to the colony. So, this is a win-win situation—both ants and bromeliads benefit by living together… or so it seems. 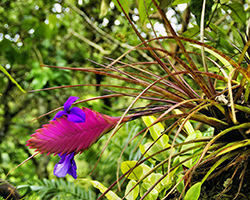 Many bromeliads have spaces in their roots or leaves, where ants can build a fairly protected colony.

Proteins and carbohydrates are both important for healthy plant growth. Most plants make carbohydrates from photosynthesis. They make proteins too, but slowly. Because bromeliads cannot move to find more protein, they likely benefit when ants bring insects home. Scientists wanted to test if ants that bring insects back home might help the bromeliads get more protein, and if the ants’ diets affect this. To figure this out, scientists looked at how the ants’ diets affect plant fitness.

Researchers collected bromeliads and ants from a forest in Brazil. The researchers potted each bromeliad individually and kept them in a greenhouse. They tested one type of bromeliad with three types of ants. Each of these three types of ants built their homes in either the plant’s leaves or roots. If you were a scientist, how might you test if ants helped the bromeliads? 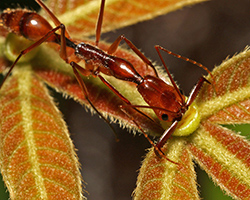 Odontomachus hastatus is one of the types of ants used in the study. Here, it looks like the ant is eating fruiting bodies from a plant (not a bromeliad). Click to enlarge.

Well, first you might want to be able to tell which nutrients the ants brought in, right? For this, scientists used a special type of nitrogen, the heavier nitrogen isotope.

Scientists used beetle larvae to feed the ants. Before the experiment, all the beetle larvae ate food carrying a special form of the element nitrogen. This special nitrogen isotope let scientists track nutrients from the larvae. If nutrients from the larvae were absorbed into the ants and bromeliads, the ants and plants would have special nitrogen too.

Ten bromeliads were in each experimental setup:

2) no ants but larvae put in the plant roots;

3) no ants but larvae put on the plant leaves;

Every two days, for two months, two beetle larvae with the special nitrogen were cut into small pieces. Researchers then added those pieces to experimental setups 2, 3, 4, 5, and 6. Because each plant was in its own pot, the larvae were the only nutrient source for the ants to collect. At the end of the experiment, leaves of the bromeliads and ants from all setups were tested for the special nitrogen. The more special nitrogen found, the more had been absorbed from the larvae into the plant and the ants. 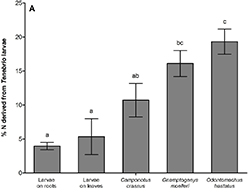 A graph showing the percent of nitrogen in leaves from different experimental groups that came from the larvae (special nitrogen). Click for more detail.

Scientists also found that one type of ant liked larvae more than the others. These ants carried more larvae back to their homes and brought more nutrients to their bromeliads. 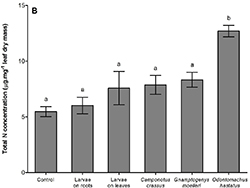 A graph showing the total nitrogen in the bromeliads from each experimental group. Click for more detail.

The other two types of ants didn’t change the level of special nitrogen in their bromeliads. The plants absorbed similar levels of nitrogen by themselves. Other research shows this is also true in the forest. Ants that eat more insects also give more nutrients to their bromeliads.

This study shows that ants can move nutrients through the forest when they collect food. They can also help their host plants get more nutrients. It makes sense, right?

So, the next time you see ants carrying food scraps from one place to another, think about the changes they are causing. They are moving nutrients in the environment and might even be taking food to another organism!

Additional images from Wikimedia Commons, flickr, and Pixabay. Trapjaw ant by The Next Gen Scientist (flickr). Leafcutter ants by Kathy & sam from Beaverton OR, USA.