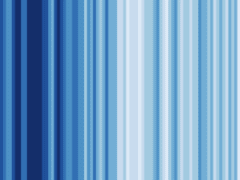 These ‘warming stripe’ graphics are visual representations of the change in temperature as measured in each country over the past 100+ years.

These graphics are specifically designed to be as simple as possible, and to start conversations about our warming world and the risks of climate change. There are numerous sources of information which provide more specific details about how temperatures have changed, so these graphics fill a gap and enable communication with minimal scientific knowledge required to understand their meaning.

For most countries, the data comes from the Berkeley Earth temperature dataset, updated to the end of 2020. For some countries (USA, UK, Switzerland, Germany, France & Sweden) the data comes from the relevant national meteorological agency. For each country, the average temperature in 1971-2000 is set as the boundary between blue and red colours, and the colour scale varies from +/- 2.6 standard deviations of the annual average temperatures between 1901-2000. For the global average only, the UK Met Office HadCRUT5.0 dataset is used and the colour scale goes from -0.75°C to +0.75°C. The stripes are usually shown for the period 1901-2020 but this can be longer or slightly shorter depending on the location and whether the data is available & considered robust.

The University of Reading is a world leader in climate science. Now, we want to help you to do something about climate change. Discover the latest science and find out what positive actions you can take,