Placebos (fake medicine) have been used for years in research to learn about the effects of medications, called drugs. Some patients experience a strange “placebo effect,” where fake drugs work just as well as the real stuff. Scientists are now figuring out a way to predict a patient’s response to drugs, and how the placebo effect can mess with actual drug effects.

Analgesia: pain relief. Analgesics, or painkillers, are drugs that can reduce pain. …more

Clinical trial: an experiment conducted by doctors and researchers where human patients are the test subjects….more

Functional magnetic resonance imaging (fMRI): a way of imaging brain activity that is based on changes in blood flow in the brain….more

Inhibit: to restrain or prevent.

Osteoarthritis: a painful condition where the tissues of a joint are breaking down, resulting in pain….more

Placebo: a fake drug with no actual effect, usually a sugar pill, given to patients when testing the effect of potential new drugs….more

Humans are a single species, but we’re different from each other in so many ways. Maybe you and your best friend are very similar, but your favorite color is red and their favorite color is blue. Maybe you think Brussels sprouts are gross, but your friend absolutely loves them. No one else always thinks and feels the exact same way as you do, because our brains are all wired differently. 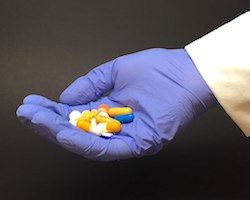 Medications do not have the same effects on everyone. Researchers are trying to figure out how to predict how drugs affect different people. Image by NIAID.

That’s why medicines are never one-size-fits-all. Some people will take a pill and feel much better. Other people suffering from the exact same disease may take the exact same pill, but it won’t affect them at all. For some painkiller drugs, also called “analgesics,” the differences in how our brains are wired decides how well the drug will work on us.

What is the Placebo Effect?

Have you ever pretended to be sick so that you could stay home from school…but then, magically (and sadly), you started to feel kind of queasy? You somehow convinced your brain that you’re too sick for school, and your brain responded by making you physically sick. Thanks a lot, brain! 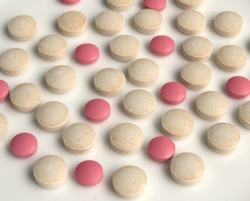 In drug studies, patients are usually given one of two pills with different ingredients. One is the actual drug that is being tested, and one is a “sugar pill,” or placebo, which has no expected effect. Any effect from a sugar pill is called a placebo effect. Unlike in this picture, placebos are made to look exactly like the real drug. Image by epSos.de

In a similar vein, whenever scientists want to test a new medication (called a drug), they must see if the drug works or if taking a pill that is supposed to work is tricking your brain to make you feel better. They do this by comparing real drug effects to the effect of “placebo” drugs – fake pills not made to cure anything. So, the doctor gives either the actual drug or the placebo to their patients without letting them know which one they’re giving. Sometimes, a patient that takes a placebo, convinced that it will cure them, can really end up feeling better.

Scientists wanted to find out how the brains of people who felt better after taking a placebo were different from those who didn’t feel better after taking a placebo pill. They want to use this information to predict which patients respond better to actual drugs. To figure this out, they studied patients with painful knee osteoarthritis and used special technology called functional magnetic resonance imaging (fMRI). 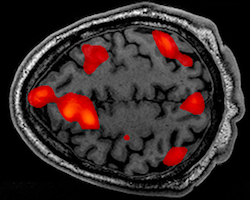 fMRIs show areas of the brain that are active, shown here in red.

You might have heard of MRIs, which are machines used in hospitals to image a brain’s physical shape. MRI stands for Magnetic Resonance Imaging, which refers to the giant magnetic coils in the machine that make the actual brain image. They’re often used to by doctors to help diagnose things like brain cancer. fMRI machines, on the other hand, are slightly different. Instead of showing what the brain looks like, fMRIs show which parts of the brain are active or not active. The active aspect is what makes these measurements “functional,” giving us the “f” in “fMRI”. This makes fMRIs useful for neuroscientific research.

Linking the Brain and the Placebo Effect

The scientists gathered a group of patients who had painful knee osteoarthritis and scanned their brains in fMRI machines. Then the scientists told the patients they’d be getting either a working drug or a placebo drug to treat their pain. All of these patients actually received placebo pills. After a few weeks, the patients came back to report how their knee pain had changed, and had their brains scanned again. 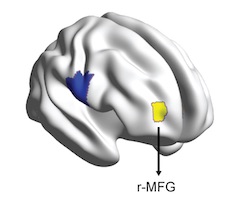 The right mid-frontal gyrus is shown here in yellow.

Human brains look like giant, wrinkled walnuts, with lots of bumps and folds. Every major bump is called a gyrus, and the right mid-frontal gyrus just means it’s the bump on the right side of your brain, underneath the skin of your temple.

We’ll call this one the placebo-gyrus because it’s linked to the placebo effect. So, if a patient’s brain had a more intense placebo-gyrus pattern, they would experience more analgesia when treated with a placebo.

To test if they could use this placebo-gyrus pattern to predict which patients would respond better to placebos, they did a second study. Again, they scanned knee osteoarthritis patients’ brains to look at their placebo-gyri (plural of gyrus) and guessed their placebo response before treating them. But this time, they gave patients either a placebo pill or an actual drug that reduces arthritis pain: Duloxetine.

After treatment, the scientists found that their predictions were 95% right for the group of patients that received placebos. They could predict which patients would feel pain relief just by taking the placebo. This means the placebo-gyrus pattern is a very accurate predictor of a patient’s response to a placebo. However, the results weren’t so clear for patients who received Duloxetine. Some of those patients reported less pain relief than what was predicted based on their placebo-gyrus pattern… which suggests that they might have felt better taking a placebo pill!

This graph shows 19 patients given the drug Duloxetine.

As it turns out, another area of the brain interferes with the placebo-gyrus: the “right parahippocampal gyrus”. We’ll call this brain area the drug-gyrus, because the fMRI picked up more brain activity at the drug-gyrus in patients that responded better to Duloxetine.

After taking all of their results into account, the scientists updated their guess about what was happening. Now they think that a person with an active placebo-gyrus is more responsive to placebo, but a person with an active drug-gyrus region would see better results with real drug treatment. The two gyri can interact in ways we’re not sure about yet – in some patients, the placebo-gyrus will inhibit the effects of the drug-gyrus, and in other patients, it can reinforce it.

This research is all part of a bigger plan: to make a brain-based drug effect predictor, for something called personalized medicine. There’s no one-size-fits-all medicine out there, so when a patient has a disease, doctors often just try all the medications they think might work, until one does. Often, none of the drugs work that well, and the patient is left suffering. In the future, if a quick scan of a patient’s brain can tell us which medications are more likely to work on that specific patient, that would save us a lot of time, pain, wasted drugs, and money. Wouldn’t that be nice?