StarTalk: Through the Wormhole 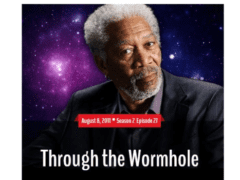 From the Big Bang to the end of time, from the mysteries of dark matter and the black hole at the center of our galaxy, to the question of whether it is possible to reverse the process of entropy, this TV series asks some of the most compelling questions facing science and philosophy. Learn why spaghettification is worse than it sounds, and what self-replicating Von Neumann machines might have to do with life on distant planets. Morgan Freeman challenges Neil on what we think we know about the universe, and explains why he’s not afraid of an alien invasion.