Ask A Biologist: PLOSable - Flight of the Bumblebees

It’s pretty easy for people to find their way around, but is it easy for insects? Researchers are finding that even without maps and navigation devices, bumblebees can usually find the best route to take when collecting pollen.

Factorial: A mathematical function used to determine all possible sequences of a series of numbers.

Navigate: to find your way.

Radar Transponder: A tiny device that reflects radar signals to a radar receiver, which reads the location of the transponder. 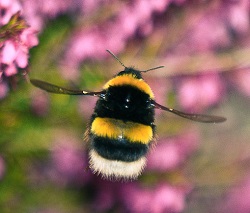 Bees have to navigate to many flowers while foraging for food.

Imagine you have to get from your house to your friend’s house by bike, and it’s really hot outside. It would probably be best to choose the shortest possible route so you don’t overheat before you get there. But how do you decide which way to go?

Researchers asked a similar question about the flight of bumblebees in the PLOS Biology article “Radar Tracking and Motion-Sensitive Cameras on Flowers Reveal the Development of Pollinator Multi- Destination Routes over Large Spatial Scales .” The researchers studied a group of bumblebees while they collected food all day, a task called foraging. Being a busy bee with lots of food to collect would be difficult with poor routing skills. However, it turns out bumblebees are pretty great navigators. 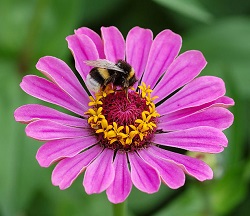 This bee is loading up on pollen and nectar before finding its way to the next flower.

When animals go out to collect food, they want to get as much payoff as possible in exchange for as little work as possible. We can relate to this too, when we think of being offered a reward to do a chore, or being offered twice as big of a reward to do the exact same chore. We want twice the reward, right? Bumblebees are no different. In biology, this work versus payoff idea is called the cost versus benefit ratio. The cost versus benefit ratio compares the size of the benefit, or reward, against the amount of effort it takes to get the reward. For a busy bee, the reward would be the amount of pollen it collected, but the cost would be the amount of work it took to collect the pollen.  Ultimately, they want to get more energy from the pollen they gather than the energy they have to burn looking for pollen. 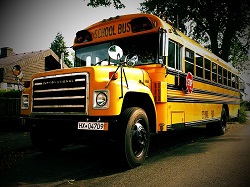 This bus is on its way to pick up kids for school, making stops in the best possible order to pick up as many kids as it can using the shortest route.

The bumblebee is faced with the same challenge, but must visit multiple flowers and collect enough nectar. This problem may seem easy to overcome for a bus driver, who has maps, navigation systems, and a much larger brain than a bumblebee. But researchers wanted to know how easily a little bumblebee can navigate.Then the bus driver needs to make each one of its stops to pick up people, which is similar to the bee picking up nectar at each flower.  Every day the bus driver needs to make the same number of stops and pick up the same number of people. Because of this, it is ideal for the bus driver to choose a route that uses as little gas as possible and takes the least amount of time, but still fulfills its duty.

Researchers designed an experiment to test how well bumblebees can choose the shortest route possible. Seven bumblebees were trained to collect nectar from fake flowers. Five fake flowers were set apart from each other in an area about as wide as a football field. The researchers placed the flowers far enough apart that the bumblebees would have to search a bit in order to find all of them.

Each fake flower was set up with its own motion-sensitive video camera so that scientists could observe the order that the bee visited the flowers. Each bumblebee was outfitted with a radar transponder that would reflect back radar signals, letting the researchers know exactly where each bee flew on each trip. 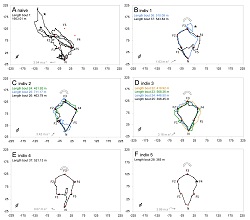 On the first trip, the bees travelled an average distance of 1,953 meters just to locate all of the flowers. Twenty-six foraging trips later, the bees travelled a path of only 458 meters, which is a huge improvement. The bees reduced the distance of their route by 80%. The researchers used mathematic equations called factorials to determine what the shortest path of travel would be, and found that the bumblebees did quite well in comparison. The shortest possible path was calculated as 311 meters, only 146 meters shorter than the busy bee path.

How Do Bumblebees Do It?

The researchers were not only concerned with whether or not the bumblebee could choose the most efficient route, but also how they went about choosing this path. The researchers thought that one of three explanations would be likely: 1) that the bees formed their flower route based off of the order in which they found the flowers; 2) that the bees would randomly shuffle the order of their route until finding the shortest; 3) that the bees would learn which flowers were closest together and then design their route. 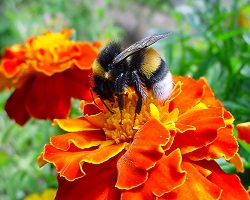 Bumblebees use several different ways to decrease the distance they have to fly between nectar or pollen-filled flowers.

The researchers determined that the bees learned from experience, which did not really support any one of their predictions in particular. Instead, it was like the bumblebees used all three approaches to keep improving their route. Each time they discovered a path that proved to be shorter than the one before, they abandoned the old path and stuck with the new path, learning through experience.

Learning about how bumblebees consider costs versus benefits can teach us to think in a similar way when we set goals for ourselves. It is helpful to consider the cost and benefit of situations, in order to make the best choices about how we invest our time and energy.  It is also encouraging to know that a bumblebee is capable of learning through experience and quickly improving upon past approaches. If a bumblebee can do this with such a small brain, just imagine all the things you can do with your relatively giant brain.