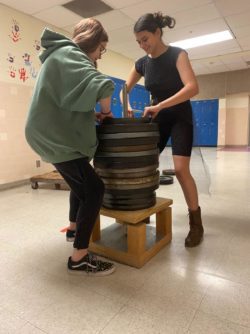 An all-girl student engineering team at Magee Middle School came in first place in one category of an international competition in creative problem-solving.

The TUSD school on Tucson’s east side came in first in the “structure problem” at Odyssey of the Mind World Finals, held virtually because of the coronavirus pandemic.

Magee was also the only middle school worldwide to enter all five of the contest’s categories.

The winning Magee team excelled at a challenge to create a framework from balsa wood weighing no more than 18 grams that would carry as much weight as possible. The students created a structure that held 1,151 pounds before breaking.

“Magee has an incredible program in Arizona for Odyssey of the Mind,” said Magee head coach Marjorie Letson. “As the Magee head coach, I have taken them to World as the Arizona champions for 23 consecutive years, but we’ve never got a first-place World trophy before. … At the international level it’s a true miracle to get a first place trophy.”

Teams from Satori Charter School and Children’s Museum Tucson were the only others in the state to place in the top 15, a news release said.

For more information on Odyssey of the Mind and the competition, go to odysseyofthemind.com.