StarTalk: Tour of the Solar System 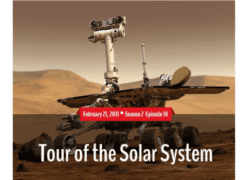 Every now and then it’s good to take a tour around your own backyard.

What a wondrous place our solar system is, from the terrestrial planets Mercury, Venus, Mars and Earth that orbit close to our Sun, to the gas giants Jupiter and Saturn that have moons with the potential for life, to the icy outer giants Neptune and Uranus, which are still hold many mysteries. (Pluto, although no longer considered a planet, is discussed too.)

Steve Squyres, the Principal Investigator for the Mars Exploration Rovers Spirit and Opportunity, talks about what it was like living on “Mars time” and why he feels like he’s been on the Red Planet. Heidi Hammel reveals her love for the ice giants Uranus and Neptune. They also discuss how astronomers have found evidence for hundreds of planets orbiting stars other than the Sun, leading ma