StarTalk: The Political Science of The Daily Show 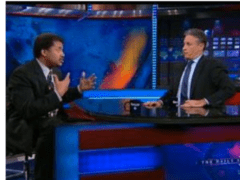 Neil talks with Jon about his love for science and technology, the difference between having scientists and politicians as guests on The Daily Show, the importance of scientific literacy, the intersection of science and public policy, and the cosmic connections that unite us all… because even New Jersey is made of star stuff.

Charles Liu provides a scientist’s perspective on how the interaction of science and society has affected technological innovation and inquiry from the past to the present, from the Earth to the Moon.