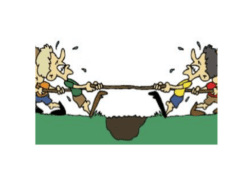 Can you use the numbers on the dice to reach your end of the number line before your partner beats you?

This game is designed to get children used to moving along a number line either side of a central point. It can help to introduce the idea of negative numbers.
The game can be tweaked to encourage higher level thinking, for example by giving children the choice of adding or subtracting the two dice numbers each turn. This means they will need to make decisions rather than rely solely on chance. In this case, children are practising addition and subtraction, and looking at all possibilities, so that they can move the number of spaces that suits them best.

What children need to know to play this game

Start by dividing the class into two teams, one Plus and one Minus, to play against each other on the board. Throw two dice and call out the numbers for each team’s turn, inviting a child to come up and move the counter each time. Having played a few times, ask the children whether they think it would be a better game if the counter has to reach the end exactly. Decide on some new rules to test this out and ask the children to play in pairs again.
Bring the class together and ask which version of the game they thought was better and why. Listen out for children who back up their opinion with a clear reason. Next, introduce a new version whereby children can add or subtract the dice numbers. Play in two teams using the board again to get a feel for this new game. Each time you throw the dice, ask the children what the two possibilities are i.e. the result of adding the two numbers and the result of subtracting the smaller from the larger. Discuss which would be best in terms of the move to be made and why. Then invite pairs to play on paper (they can decide whether the counter needs to reach the end of the board exactly or not).
In the plenary, ask the class which version of the game they thought was best and why. In this case, draw out responses which indicate that the choice of adding or subtracting means players are more in control. You could suggest that children invent their own rules to make better games, perhaps over a longer period of time, and you could dedicate an area of your wall to their ideas.

These questions have been phrased in ways that will help you to identify children’s prior knowledge about both the number concepts involved in playing the game and the strategies/mathematical thinking needed to win.

Is it better to play a game where you have to reach the end exactly, or where you can go over the end? Why?
Can you think of some different rules of your own?
What makes your game better than the other versions?

In addition to analysing the rules of this game as suggested, the game Tug Harder could be played which explicitly introduces a number line including negative numbers.

The game can be simplified by using one dice and moving the number thrown instead of adding the numbers on two dice. In this case having a shorter number line to 15 and starting at 8 would be better.
Children could try the Incey Wincey Spider game as a precursor to this one.
Math Topics Resource Audience
Addition & Subtraction, Number Values & Counting
K-6
RELATED LISTINGS
Showing 1 - 3 of 3
NRICH
NRICH (University of Cambridge)