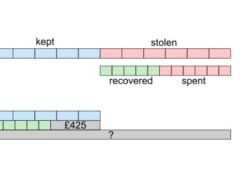 How much money did the pensioner have before being robbed?

A thief stole 611 of a pensioner’s money and spent 611 of the money stolen. The thief was then caught, and the remaining money was returned to the pensioner.

This problem is adapted from the World Mathematics Championships

The links below take you to a selection of short problems based on UKMT junior and intermediate mathematical challenge questions.