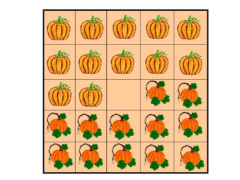 A game for two players based on a game from the Somali people of Africa. The first player to pick all the other’s ‘pumpkins’ is the winner.

To start:
Set the counters out as above.
Take turns to move one of your counters one square up, down or sideways.

To capture the other player’s counter jump over it and land in an empty space.
This is called picking the pumpkin.

The winner: the first player to pick all the other player’s pumpkins.
If the game becomes blocked, the player with the most pumpkins left wins.