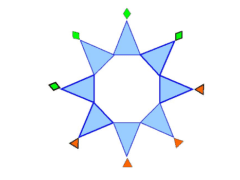 Try playing this game from New Zealand at the beach by drawing the board in the sand. Find an opponent and see if you can win by ending up with your shell in the centre space.

The winner: when one of you is surrounded and unable to move any of your markers