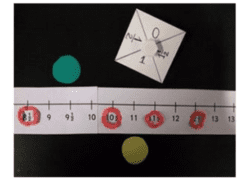 A game to make and play based on the number line.

Here’s a great game that you can make and then play with a friend. It’s called Snake Pits.

There! You’re ready to play the game now. Here’s how:

The aim of the game is to use as few counters as possible to reach 15 on the number line.

You can make the game a little bit different by:

This problem has been adapted from the book “Using Number Lines with 5-8 year olds” by Fran Mosley, published by BEAM Education. This book is out of print but can still be found on Amazon.