Cyra and her peers will provide a youth’s outlook on science and STEM careers. In the launch video, she said, “This new YouTube channel, Perspective, is going to be used to provide a different look into STEM around the world. There are many different outlets for STEM professionals to talk about STEM and science and their careers. But, what are the youth thinking? …In this new channel, we aim to take a younger look at science throughout the world. Children can bring a new look and perspective on life. The CSO program unites students of different nationalities and ethnicities toward one common goal: spreading awareness about STEM and STEM careers.”

Visit and subscribe to Perspective with CSO Cyra. From professional interviews to science-themed jokes, you’ll appreciate the insights and wisdom of the students who are creating and producing the monthly series.

Check out the promo video and Episode One, and of course subscribe to the channel so you can catch all the upcoming episodes! 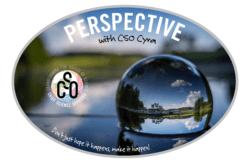 Here are some thoughts about the new channel from the young leaders who are making it happen:

Last year, I approached Ms. Greene with the idea of starting a YouTube channel for the Chief Science Officers program. It was just a thought, a little idea that I believed would help us showcase the amazing things we do in the CSO program. Little did I know that idea would blossom into Perspective, a YouTube channel starring the CSOs.

Here, we aspire to highlight the growth and accomplishments of students within the CSO program and discuss the latest in STEM outreach and education. So far, we have only released our first episode, but we hope to release many more soon! Starting the Perspective YouTube channel felt like an impossible accomplishment. It was incredibly inspiring to see it go from an idea in my head to a ful-fledged channel. I can’t wait to develop Perspective further in the future.

Episode 1 of Perspective is out and I couldn’t be happier. I am so thankful to work with such wonderful people and am excited to continue to create more content for this YouTube channel. It has been so amazing to see ideas or concepts become a reality. It is truly spectacular to see every effort going into this project and with one episode under our belts, I am ready to grow our channel even more. None of this could have been possible without the core team of CSOs making it happen. Also, certain adults were key to our success as well. I am grateful for such an amazing team and can’t wait for more memories to be made!

It has been amazing being a part of the Perspective channel team, and participating in the planning of our first video, which was just released last month! I have enjoyed working and collaborating with this great team, and connecting with the global network of Chief Science Officers while doing so. In what seems like a blink of an eye, the initial vision of highlighting the many things going on within the CSO program and within the STEM world in general has become a reality, and the launch video has marked the start of it. I can’t wait to see what things we’ll be able to accomplish in the future as we further progress and produce more content!

CSO Nikhil
“Hey Nikhil, we love your editing skills and think you would be a great match to be an editor for our new YouTube channel, Perspective!” My first conversation with this all started somewhat like this, being confused, several questions in my mind (as usual), but something about it all was exhilarating. We were starting a YouTube channel from scratch, we had a new canvas that we could paint whatever we wanted on, and with such relaxed guidelines from the team, the CSOs were able to use our own creative abilities to make what we wanted to see, not because we were told to do it, but because we were a part of the team that was making it all happen.

Of course with all of this, I will not lie for all the viewers, this was terrifying. Being that all of the behind-the-scenes work was at home, it’s not like I could get this reviewed by someone. I thought I would be responsible for any mistakes that would happen because frankly, I am. I would make sure to talk with all the team, make sure every clip is perfect, send out drafts, see if I have to make any changes, but what I found in an instant, is that the team behind Perspective is one of the strongest you will find. I bothered them with a lot of questions, and I mean a lot, and they solved all problems, tweaked anything that we might need to, and ultimately this team is the reason we launched this video on August 15 with the response that it ended up getting.

The scene in the video with the countdown of the Starlink rocket, reflected exactly how I felt. It was a countdown, a moment of “did we do good enough,” pressing that publish button, and then we finally LAUNCHED and reached further than we ever thought. Thank you to everyone who helped make it happen! Want more? Don’t worry, Perspective is only just now getting the show on the road!

Those are the thoughts of the founding members of the Perspective team, and now several additional students are preparing to join the effort. They’re not only from other states, but around the world.

As the students interview STEM professionals, offer STEM challenges, provide fun STEMonstrations and creatively highlight the importance of STEM, they are also developing a strong network of science lovers and professionals. With quality leaders like these at the helm, the Perspective channel is sure to impact students around the world!