A powerful benefit of any learning group is its alumni network. The Chief Science Officers are no exception! Any CSO knows that others who have participated in the program are go-getters. They’re people who have big ideas, work with others to implement action plans, and impact both small groups of people and entire regions.

Here’s an example from Adbullah Al-qallaf, a CSO from Kuwait. He describes entering a local CSO competition:

My teammates and I trained hard to beat our rivals by designing the project prototype early. Our project wasn’t easy and it took a lot of time, especially because it was at the end of the school exams. We had to study and train at the same time. We raced against time to beat our rivals. And we did it; we won that competition.

Our prize was a chance to visit the USA and work with other CSOs at Arizona State University. During the time we spent at ASU, I met many students and on the last day at ASU I taught 20 students how to speak Arabic so they could remember Kuwait and me.

I discovered I had changed after the trip. Now I can take on more responsibilities, and now I believe that I can do anything if I try hard  – and that if I take the easy way out I will not taste victory.

This kind of meaningful learning doesn’t have to stop with high school graduation! The CSO International Alumni Association was just formed to enable CSOs who have graduated from high school to stay engaged through networking, professional development, and volunteering opportunities.

The inaugural meeting was held in July, and attendees were thrilled to keep their connections going. They plan to make this a powerful group that continues to enact change rather than talking about the “good old days” when they were active. 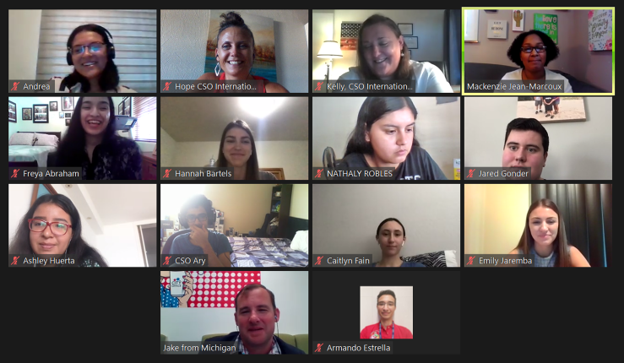 Emily Jaremba, a former CSO from Michigan, is now a sophomore studying biochemistry at Saginaw Valley State University who plans to continue on to graduate school.

Emily said, “I’m excited to help the CSO alumni grow as they continue their education or enter their career fields by increasing their networks, building their leadership abilities, and aiding in any additional career-readiness they may need. Also, I think it will be very beneficial for the alumni to mentor current CSOs, as it will build our leadership skill sets as well as increase the impact current CSOs will have on their schools and communities.”

CSOs worked hard to earn the right to be part of this elite group, and all program graduates are encouraged to join. In addition to ongoing networking, alumni will participate in:

Andrea Acuña Quiroz, from Mexico, was a CSO when she was in high school. Now she’s studying industrial engineering and learning Autocad. She’s planning to work with new CSOs as a mentor because she wants to help the program expand all over her country. She said, “Most CSOs would really hope everyone in our generation could experience this program and be part of a bigger change in education that impacts everyone.”

She added that the international connections are powerful because “it is helpful to know people around the world to learn about different situations. Plus as I get older and start to work, I am sure I’ll need the network.”

The leadership team is currently comprised of CSO alumni: Emily from Michigan, Andrea from Sonora, Freya from Arizona and Kassandra from Sonora, Mexico.

CSOs know the high level of personal and professional growth they experienced while in the program. For many, the value of this network (created in middle and high school!) will outpace their connections made in the working world. CSO alumni are invited to take that to the next level by joining the official alumni group. Email Hope Parker for more details.

Stay connected to help yourself and others!

Technology Trends That Will Disrupt The Education Industry