Semiconductor and other industries embrace augmented reality after finding new uses for the visualization tool during the pandemic. 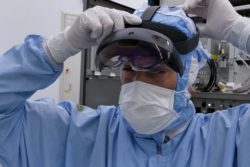 Intel Corp.’s semiconductor production hit a stumbling block in March. A chip plant in Chandler, Ariz., needed work done, but the engineer for the job was stuck in Germany because of trans-Atlantic flight restrictions to combat the spread of the coronavirus.

Unable to ﬂy in the expert, Javaid Ikram, an engineering manager at the plant, transported him virtually using repurposed augmented-reality goggles that had been developed mainly to show training videos. The stranded engineer, watching a video feed his counterparts at Intel relayed via their goggles, walked them through the repair, Mr. Ikram said, allowing the work to be completed on schedule.

Across multiple industries, augmented reality, or AR, has transitioned during the pandemic from intriguing experiment to everyday tool, widening the industrial adoption of a technology that many in the tech industry argue hasn’t measured up to its promise in the consumer market. The technology, which imposes digital images onto views of the real world, allows specialists and managers to show colleagues what to do without standing shoulder-to-shoulder with them.

That makes augmented reality more useful in a world where business travel and direct human interaction are restricted—and likely to stay that way for a while. Volkswagen AG ’s Porsche unit said in April that usage of AR glasses in its U.S. dealerships more than tripled during the pandemic as technicians performing complicated repairs on the pricey sports cars called in virtual help from repair experts hundreds of miles away.

In health care, a major hospital provider in London has used Microsoft Corp.’s HoloLens goggles to treat coronavirus patients, limiting the number of doctors exposed to people infected with the virus and allowing specialists to provide treatment guidance from a safer location. Broadband internet company Cox Communications Inc. in March rolled out augmented-reality technology to its workforce of more than 5,000 people, including home technicians and contractors. Thermo Fisher Scientiﬁc Inc., a manufacturer of scientiﬁc instruments, scaled up its use of AR, to guide customers through repairs from afar.

Facebook Inc. Chief Executive Mark Zuckerberg last month said AR—along with its sister technology, virtual reality, where what people view in their headsets is entirely digital—would be important for the tech giant’s plan to permanently increase its remote workforce over the next decade.

At Intel, the success at the Arizona plant launched remote maintenance from an experiment to part of the company’s permanent operational plans. “The switch ﬂipped, and the word spread and all the other factories from around the Intel ecosystem started to say, ‘Hey, we need to use this as well,’” Mr. Ikram said.

The chip industry, with its ultra-specialized machines and highly automated factories, called fabs, is well-suited for using augmented reality. But while chip companies toyed with augmented reality for years, they kept it sidelined even as they added other advanced technologies such as artiﬁcial-intelligence tools to detect chip defects and data analytics to streamline manufacturing processes. Cameras had long been kept from factory ﬂoors because concerns about protecting trade secrets outweighed potential advantages that AR devices could provide, industry executives say.

“Previously I would have said I’m not letting a camera into my fab. Are you crazy?” said Wayne Allan, executive vice president of customer support at ASML Holding NV, the Dutch maker of chip-manufacturing equipment. But in recent months, ASML has been working with customers using Microsoft’s HoloLens to help maintain its machines at their plants.

While some smartphone-based applications of augmented reality have become wildly popular, the adoption of AR goggles has long lagged behind the hype, especially in the consumer market, thanks to the bulkiness of many devices and a dearth of useful applications.

Industrial applications are giving the technology a new boost. Magic Leap, an AR-goggle startup, said it is shifting from the consumer market to targeting health-care, defense and other business-related customers.

Microsoft last year introduced the second generation of its HoloLens—one of the more popular devices for companies adopting AR—with an enterprise focus. The devices, which cost $3,500 each and weigh about 1.3 pounds, feature a skiing goggles-like visor on which information is displayed and tracks eye movements to help users sift through data.

Still, consumer weakness and supply shortages are weighing on the near-term AR market, said Ramon Llamas, research director at market-intelligence ﬁrm International Data Corp. In April, the ﬁrm trimmed its growth projection for sales of 10.8 million AR and VR headsets this year: It now expects 7.1 million units to be sold, up from 5.7 million last year.

London-based Telit Communications, which sells software called secureWISE that is used to manage manufacturing tools remotely, saw traﬃc via those tools more than double between February and April, said Fred Yentz, its president of strategic partnerships. SEMI, an industry body, has introduced standards for remote operation.

Globalfoundries Inc., another major chip maker, faced a similar problem to Intel’s. When one of its multimillion-dollar machines needed work, an engineer at one of its plants donned a HoloLens headset and called up a video chat to consult an ASML equipment expert in the Netherlands to guide him through repairs.

Globalfoundries Chief Executive Tom Caulﬁeld said the company is now using iPads, headsets, and AR or VR tools to do jobs once done by traveling engineers.

ASML realized it needed a new approach when China locked down the city of Wuhan in January to ﬁght the coronavirus—a need that became more urgent when the U.S. imposed its travel ban on Europe in March. ASML set up a team of about 30 people—later expanded to about 100—to ﬁgure out how to use augmented reality in maintaining the machines that imprint intricate outlines of transistors on silicon plates. ASML rolled out the service with its ﬁrst customer on March 20.