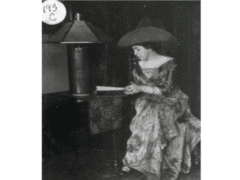 Wrexie Louise Leonard was born in Troy, Pennsylvania, in 1867 and later moved to Boston with her older sister, Laura.

She met Percival Lowell in Boston in 1893 and began working for him as a secretary.  On December 10, 1895, she joined Lowell and a party of astronomers to Africa in search of a suitable site on which to build Lowell’s proposed observatory.  After Lowell selected Flagstaff, Leonard accompanied him on his travels throughout the United States and Europe (including his visits to Arizona) until his death in 1916.

Leonard’s role as secretary was complex.  She handled the observatory’s accounts, keeping bank records in order and dispatching checks to V.M. Slipher (who paid observatory bills in Flagstaff) on Lowell’s orders.  Leonard herself took care of purchasing, which had to be done outside of Flagstaff. For example, she bought observatory stationery in Boston and furniture for the new Baronial Mansion (Lowell’s Flagstaff residence) in Chicago.  She also wrote speeches for Lowell, read publishing proofs for several staff members, including Lowell himself, and relayed orders from Lowell to various members of the staff while he was out of town. In addition to her work as secretary, Leonard joined Lowell in his observations of the planets and other astronomical objects. Her drawings and notes appear alongside his in many of the observation logbooks.

When Lowell died in 1916, his widow, Constance, promptly fired Leonard, who then returned to the East.  She was comfortable financially until 1929, when the stock market crashed.  She lived with a niece in New York for a time and eventually moved to Roxbury’s Trinity Church Home for the Aged.  Shortly before her death, she was moved to the hospital in Medfield, Massachusetts, where she died in 1937.