Maintaining Critical Mass: Arizona’ tech industry may be booming, but many companies are seeing challenges in hiring amid growing competition for skilled workers.

A healthy economy means one thing: a robust dose of hiring.

Arizona now has more than 9,000 technology companies in business, a milestone the state reached in 2019, according to the Arizona Technology Council.

In turn, those companies created 6,723 jobs last year, according to the Tech Council’s 2019 Technology Industry Report. And the state is expected to surpass those job creation numbers this year as more companies continue to bump up their payrolls.

For example, after hiring 2,000 Arizona employees during the past two years, Waltham, Massachusetts-based Raytheon Co. (NYSE: RTN) expects to hire another 1,000 people for its expanded Tucson facilities to meet growing customer demand.

Already employing more than 1,000 people in Arizona who work out of clients’ offices, Infosys Ltd., a Bangalore, India-based digital tech and consulting services firm, plans to hire another 1,000 employees by 2023 after opening a temporary digital tech and innovation center in September at SkySong. A permanent 60,000-square-foot facility is expected to open in Arizona State University’s Novus Innovation Corridor later this year.

Meanwhile, two startup vehicle companies, Nikola Motor Co. and Lucid Motors Inc., both have big hiring plans as they ramp up manufacturing in Pinal County, about 50 miles south of Phoenix.

With thousands of tech jobs available and in the works, it means good things for workers with sought-after skills. But a severe shortage of tech workers in general — a problem that is even more acute for specific skill sets — could spell trouble for the region’s burgeoning industry. 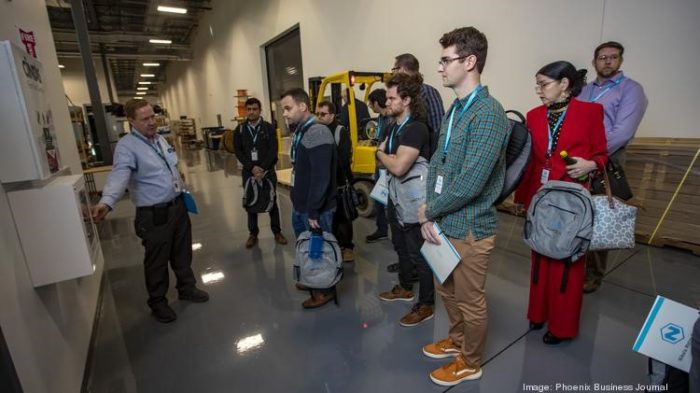 Nikola has been hiring and recently trained 13 of the newest employees. Ken Mushet, environmental health and safety manager leads the 13 new hires on a tour of the facility in Phoenix.

“The biggest challenge right now is candidates with the needed skills are more confident than ever because they typically get multiple offers,” Pham said. “A lot of companies are dealing with competing offers, on top of companies trying to retain their employees. Counter offers are prevalent as well.”

In such a competitive market, businesses need to ensure they’re offering the best salary, benefits, perks, continued tech training and company culture to attract and keep employees, he said.

“Because of the shortage of supply in talent here in the Valley, we’re seeing a very high level of open jobs in the Valley. Talent has never been shorter,”

Pham said. “More companies than ever are open to the idea of looking outside the Valley for relocation candidates, although we believe companies should leverage in-town talent as much as possible. More companies have moved to Arizona, and that’s increasing that talent shortage.” 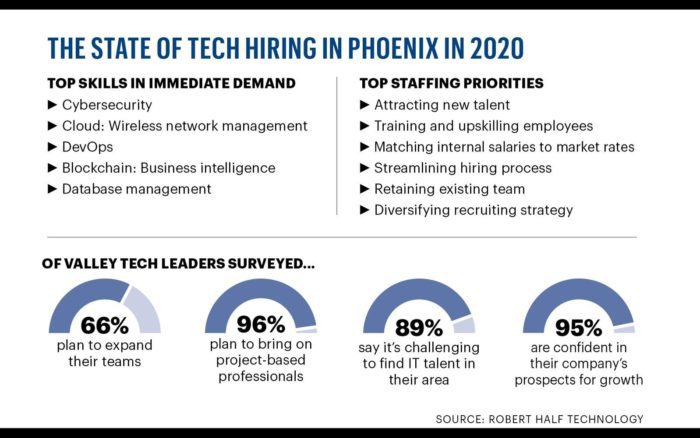 The challenge of finding workers is exacerbated by so many different companies hiring at the same time across a range of different jobs, according to businesses that have announced big hiring plans.

Scottsdale-based information technology services company Solugenix Corp., for example, plans to hire another 400 work-at-home employees by the end of 2021 after making its first acquisition in November.

That hiring spree was spurred when Solugenix, which celebrated its 50th anniversary in 2019, acquired Missoula, Montana-based SEI LLC, a company specializing in hiring skilled employees who work from home in rural communities.

Solugenix President and CEO Shashi Jasthi said the hiring situation is “brutal out there.”

“I haven’t seen such a tight market in my entire career,” Jasthi said. “And I have been in this industry since the 1980s.”

Since Solugenix is trying to hire skilled and highly trained IT professionals, the company has seen multiple offers given to these sought-after employees.

“We’ve lost a lot of candidates because they’ve had multiple job offers,” Pyun said. “We are raising salaries to combat that [with salaries ranging from $160,000 to $300,000], offering better compensation packages with 401(k) plans, better vacation accrual structures, better medical benefits and made our benefits package more effective. We’ve also increased our brand and marketing image.”

Where Solugenix is not having a problem is in hiring workers for its customer-support presence in the state. Those lower-paying, lower-skilled jobs have plenty of applicants, Pyun said.

“We really feel like Arizona is ideally situated and the right market to create a customer-support presence,” Pyun said.

Phoenix has a longtime reputation as a back-office and call center hub, with plenty of low-cost workers available. And that trend isn’t slowing down any time soon as companies continue to open those types of operations in the region.

TransPerfect Global Inc., a New York-based translation services provider with $764 million in revenue last year, including over $30 million in the Phoenix area, opened a new call center in Phoenix in July and has plans to fill it with 900 workers. The company’s Connect division, which opened a Tempe call center with 150 people in 2011, recently opened the new 75,000-square-foot Phoenix facility because it needed more space.

“We [expect the growth] in Phoenix to outpace the growth in some of the larger, more traditional areas, like New York, Barcelona and London,” TransPerfect CEO Phil Shawe said. “We see the Phoenix area as a high growth unit for the company.”

Steve Cheeseman, vice president of contact center operations and division president for TransPerfect Connect, said hiring has gone well. Since July, the company has brought in 200 people, making the new facility half full. He expects to hire another 400 to 500 workers by the end of 2020. The company has 6,000 employees worldwide.

“We’re excited about the level of talent we’re seeing,” Cheeseman said. “In 2020, we’re expecting explosive growth. Our biggest challenge is keeping pace with the growth. We want to make sure we can hire people who can pass our assessments and rigorous recruiting efforts.”

“We recruit for those languages but there’s still a rigorous recruiting process with language competency to fill those roles,” he said. “As we continue to grow, that will continue to be a challenge.”

Software and service companies aren’t the only ones experiencing hiring challenges. Urbix Resources LLC, a Mesa-based startup, is preparing to open a $4 million graphite purification facility it says will be one of the largest in North America.

The 15-employee company plans to hire up to 100 people within three years. Nico Cuevas, Urbix’s CEO, chairman and co-founder, said his company will hire for chemical, mechanical, industrial and quality assurance engineers, along with material scientists.

While operations jobs may not be difficult to fill, research and development jobs will be the most daunting, Cuevas said.

“The challenge for us is to identify engineers that specialize in energy storage and carbon-based advanced material,” he said. “We have Ph.D.s from Cambridge, [University of Arizona] and other engineers from different locations we rely on for word of mouth. It’s such a small niche community that’s how we operate.”

As the company grows, Cuevas expects to look nationally for more hires, including in Canada, the UK and Mexico.

“We’re excited to bring a bunch of intelligent, hard-working employees to Arizona to make the state a hub for energy storage in advanced materials,” Cuevas said.