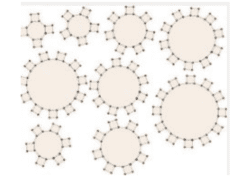 This problem requires children to think about factors and multiples and, in particular, common factors, but it is not necessary for them to have met this term prior to having a go at the task.

It offers opportunities for pupils to ask their own questions, find examples, make conjectures and begin to generalize.

The problem lends itself to collaborative working, both for children who are inexperienced at working in a group and children who are used to working in this way. By working together on this problem, the task is shared and therefore becomes more manageable than if working alone.

If you colored one tooth on each cog, which pairs of cogs let the colored tooth go into every ‘gap’ on the other cog?

Which pairs do not let this happen? Why?

Can you explain how to determine which pairs will work, and why?

Introduce the four group roles to the class. It may be appropriate, if this is the first time the class has worked in this way, to allocate particular roles to particular children. If the class works in roles over a series of lessons, it is desirable to make sure everyone experiences each role over time.
Give each group a copy of this sheet, which outlines the task. The idea is for them to read it together to find out what to do. Cut out a set of cogs for each group using this sheet and give them out so each person in a group has two or three cogs. Alternatively, it might be possible for children to use the interactivity to try out their cogs. Children should begin by working individually, investigating several pairs of cogs, then they will pool their findings as a group so that they have worked on all combinations of cogs.

Explain that each group will be expected to report back at the end of the session, showing the patterns they noticed, at least one conjecture they have and at least one question. Exploring the full potential of this task is likely to take more than one lesson, allowing time in each lesson for children to feed back ideas and share their thoughts and questions. Ask each group to record their reasoning, conjectures, explanations and any generalizations on a large sheet of paper (for example flipchart paper) in preparation for reporting back.

There are many ways that groups can report back. Here are just a few suggestions:

Which cogs have you found that work so far?
Which pairs didn’t work? Can you explain why?
How could you predict whether a pair will work before you try them?
What questions would you like to ask?

Children could begin to work on a question that they have, or a question posed by another group.

By working in groups with clearly assigned roles we are encouraging students to take responsibility for ensuring that everyone understands before the group moves on.

You could cut out the cogs from these sheets or you could use the cogs interactive environment to try out your ideas.