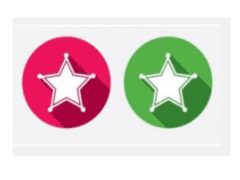 For each round, after Player A draws stars in his circle, determine the probability that Player B will end up with more stars than Player A.

From Helping with Math at Home: More Ideas for Parents. 2006. Portsmouth, NH: Heinemann.