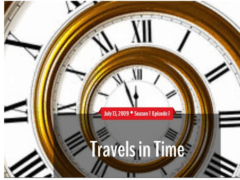 Is time travel possible? Or has it already happened?

Get ready to spend some time pondering time, because in this episode of StarTalk, host Neil deGrasse Tyson is joined by co-host J. Richard Gott, author of Time Travel in Einstein’s Universe and an expert in exotic astrophysics. Join us as we explore time travel, black holes, and worm holes, and analyze some Hollywood time travel films in terms of their scientific accuracy.

Rich enlightens us on the fact that time travel is mathematically possible, citing Einstein’s Theory of Special Relativity to explain the phenomenon. In fact, there’s some time travel going on in the recording studio when Rich explains that Neil is seeing him as he was 3 billionths of a second before…maybe solving the secret to looking younger?

Next up on the space-time continuum is the question of whether gravity effects time travel. Rich tells us that on a planet like Mercury, whose gravitational pull from the Sun is so strong, time ticks slower. You’ll hear some discussion about the accuracy of the movie The Time Machine, and how building a time machine like they did, as long as it uses the mass of Jupiter, just may give us enough energy to travel forward in time to find out the results of the next election!

Another way to travel through time may be to orbit a black hole, but Rich warns us against getting too close to the point of no return unless we want to be spaghettified. You’ll also hear a little about Hollywood’s take on time travel depicted in Back to the Future, as well as in Planet of the Apes, for which Rich suggests that the first clue that time travel had occurred should have been that the apes were speaking English.

The episode gets even more interesting when Neil and Rich take phone calls from fans. They answer questions about the expansion of space, seeing back in time through modern telescopes, and how the fabric of space stretches faster than the speed of light. Investigate wormholes, curved spacetime, general relativity, and all that cosmic craziness.

Even crazier, though, may be when Neil recalls a strange memory of being confused for Michael Jackson when he was a kid, sparking his curiosity about whether MJ could’ve traveled back in time to get his old nose back? Rich says that even though we can travel into the past, we can’t age in reverse. Ponder the Grandmother Paradox, and whether time travellers have the ability to change the past. Finally, a fan asks how the past, present, and future coincide with the continuum of time. Rich has plenty of answers, but we’ll leave you with his reference to Einstein: “time plays out like a movie.” So, to make the most of your movie, we encourage you to sit back, relax, and enjoy the show.