StarTalk: The Science of Star Trek 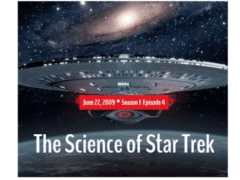 The Star Trek TV and movie series imagine a bright future for humans in space, one in which we explore alien worlds with the aid of advanced technology.

Because the writers tried to include as much realistic science as possible within the fictional framework, the stories have been an inspiration for students, scientists, inventors; and anyone interested in pondering our destiny on Earth and beyond. In this show, Brandon Fibbs reviews the latest Star Trek movie now in theaters, and Lawrence Krauss talks about how Star Trek uses science to explore what is possible in our universe.