StarTalk: The Physics of Superheroes 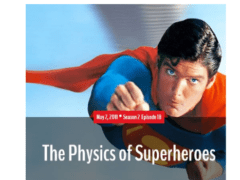 Super heroes are popular because we dream about having their amazing powers—super strength, flight, X-ray vision, invisibility. Although seemingly impossible, many superpowers are based on real science.

Join astrophysicist Neil deGrasse Tyson in exploring whether science could let us see through walls like Superman, shoot webs like Spider-Man, disappear like the Invisible Woman, shrink like Ant-Man, stop bullets like Wonder Woman, run as fast as The Flash, or recreate Batman’s amazing technology. Physicist and author James Kakalios examines the physics of caped crusaders, while Lee Silver describes animals with abilities that could expand the limits of human biology. Meanwhile, mild-mannered Eugene Mirman wonders what it would be like to leap tall buildings in a single bound—or at least jump to the second floor.