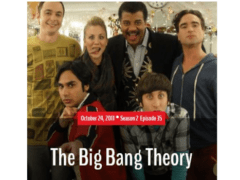 Neil talks with Bill Prady, co-creator and writer of the show, about why he decided to create a show about science geeks and the universal emotions that even theoretical physicists and engineers experience. Joining the conversation is David Saltzberg, professor of physics and astronomy at UCLA and science advisor to the show. From romantic relationships to religion to reflections on relativity, learn about the many ways “The Big Bang Theory” uses science to shine a light on society.