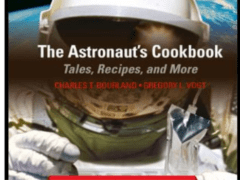 From the early Gemini space missions to the future of Mars exploration, anytime humans venture beyond home they’ll need to have some snacks for the road.

Dr. Charles Bourland developed food for astronauts for 30 years, since the days of the Apollo Moon landings, and he propounds on the preparation and packaging that goes into making food fit for space.

Chef Brian Ray, whose engineer father worked on the Apollo LEM and Saturn rocket, considers how cooking and restaurants would change in microGravity. Eugene Mirman reconsiders his desire to take a journey into space if instead of chips and BBQ ribs, he has to settle for irradiated beef and freeze-dried ice cream.