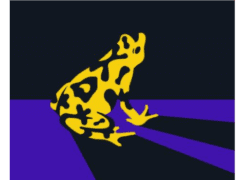 In the mid-1990s, investigators identified a mysterious and seemingly unstoppable killer.

Its name? Chytrid. Its prey? Frogs.

Since then, the disease has ravaged frog populations worldwide, and despite decades of research there’s still no cure. So, like modern-day Noahs, a group of Smithsonian researchers have resorted to a time-honored plan: building an ark…for amphibians. This time on Sidedoor, we travel to the Panamanian jungle to see how it’s helping some endangered frogs avoid extinction.