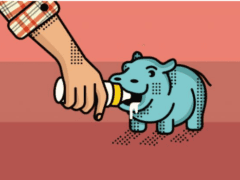 “A hippo, an orangutan, and a scientist walk into a milk bar…” or so our story goes.

In January 2017, Fiona the baby hippo was born at the Cincinnati Zoo six weeks premature and some 30 pounds underweight. Getting Fiona to put on pounds was a life-or-death matter. Unfortunately, nursing wasn’t an option, and the only hippo formula recipe on file was old and out of date. To devise a new one, team Fiona turned to the scientists at the world’s largest exotic-milk repository at the Smithsonian’s National Zoo. But could they do it in time, and would Fiona drink it?

The Smithsonian’s National Zoo and Conservation Biology Institute actively work to save species around the world. Do you want to learn more about how the Zoo’s milk bank plays a critical role in that conservation? Check out their cyro-initiative page! And as for baby Fiona, the beloved hippo at the Cincinnati Zoo, here’s a YouTube playlist with 27 videos of her being adorable. We won’t blame you for watching all 27 of them. Twice.
Science Topics Animals Resource Audience
Biology, Zoology
Hippopotamus
High School
RELATED LISTINGS
Showing 1 - 1 of 1
Sidedoor: A Podcast from the Smithsonian
Sidedoor (Smithsonian)