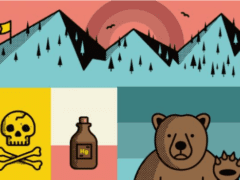 Then, at the age of 30 on an expedition to Russian Alaska in 1866, Kennicott was mysteriously discovered dead by a riverside. Rumors of all colors circulated about the cause of his death, although, it wasn’t until 135 years later, in 2001, that two Smithsonian forensic scientists cracked the case.

To say Robert Kennicott left a lasting impression on the Smithsonian is an understatement. Search for his name in the Smithsonian’s National Museum of Natural History collection records and you’ll find his handprint everywhere from anthropology to mammals. Although Kennicott’s research took place more than 100 years ago, his work still has an impact on contemporary science. The Smithsonian Institution Archives also has tons of photos, letters, and maps of his that have been digitized. Doesn’t he look like a cross between Johnny Depp and Daniel Boone?