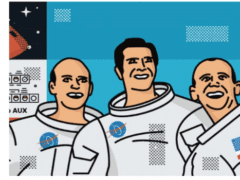 Seconds later, a burst of static plunged the three-man crew into complete darkness while speeding toward space in a nearly dead spacecraft. For the 50th anniversary, we tell the often-overlooked story of Apollo 12, one full of danger, discovery, and the power of friendship.