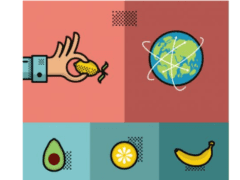 In the 1800s, the American diet was mostly made up of meats, potatoes, cheese, and perhaps the occasional green bean.

Fruits and other veggies? Not so much.

But that all changed thanks to a group of 19th-century food spies—globe-trotting scientists and explorers who sought exotic crops to enhance America’s diet and help grow the economy. A pioneer among them was David Fairchild, who nabbed avocados from Chile, kale from Croatia, mangoes from India, and much more. In this episode, we learn about Fairchild’s remarkable adventures and take a surprise trip to the Smithsonian’s archives to uncover a rare piece of food-spy history.

You too can view Fairchild’s journal in the Smithsonian Institution Archives—or any document in the Archives’ collection—all you have to do is make an appointment online! And if you’d like to read Daniel Stone’s new book, The Food Explorer: The True Adventures of the Globe-Trotting Botanist Who Transformed What America Eats, you can pick up a copy wherever books are sold.
Science Topics Resource Audience
Biology, Food Science, Health & Medicine
High School
RELATED LISTINGS
Showing 1 - 1 of 1
Sidedoor: A Podcast from the Smithsonian
Sidedoor (Smithsonian)