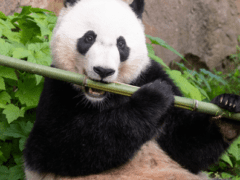 The Smithsonian’s National Zoo is bidding farewell this week to one of its most popular bamboo-loving residents: Bei Bei.

Why? The black-and-white bear is on temporary loan to the National Zoo from the Chinese government. That’s the case with the majority of captive pandas around the world. Bei Bei’s loan agreement stipulated that he must go to China when he reached 4 years of age.

Bei Bei will be sent to China on Tuesday to live at the Bifengxia Panda Base, run by the China Conservation and Research Center for the Giant Panda. Once he reaches sexual maturity, he’ll enter its breeding program with the ultimate goal of expanding the captive panda population.

Bei Bei’s siblings, Bao Bao and Tian Shan, were sent to China in 2016 and 2010, respectively. With Bei Bei’s departure, the Smithsonian’s National Zoo will be without an adolescent panda.