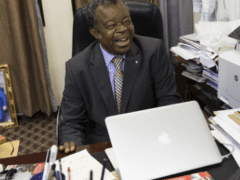 Jean-Jacques Muyembe is a Congolese doctor who headed up the response to the recent Ebola outbreak in Congo.

Back in 1976, he was the first doctor to collect a sample of the virus. But his crucial role in discovering Ebola is often overlooked. NPR’s East Africa correspondent Eyder Peralta helps us correct the record.

You can always reach the show by emailing shortwave@npr.org.