Short Wave: The Arecibo Telescope Is Damaged — And That's A Big Deal 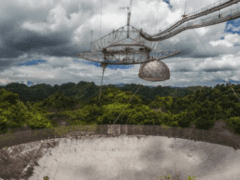 In early August, a cable snapped at the Arecibo Observatory in Puerto Rico, causing substantial damage to one of the largest single-dish radio telescopes in the world.

Planetary scientist Edgard Rivera-Valentín explains what’s at stake until the damage can be repaired and the unique role the telescope plays in both scientific research and popular culture.

This episode was produced by Brit Hanson, fact-checked by Viet Le and edited by Deborah George.

Today, we revisit our conversation with planetary scientist Edgard Rivera-Valentín about the unique role Arecibo has played in both scientific research and popular culture.