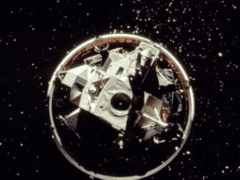 Since the dawn of Sputnik in 1957, space-faring nations have been filling Earth’s orbital highways with satellites: GPS, weather forecasting, telecommunications.

Orbital debris, commonly known as “space junk,” exists at all levels of orbit, but is especially concentrated in low Earth orbit. Space junk has the potential to damage working satellites and crewed spacecraft, including the International Space Station.

And, the population of space junk is projected to grow, as the commercial space economy continues to expand and more satellites are scheduled to launch.