Short Wave: Space Launch! (It's Tomorrow And It's Historic.) 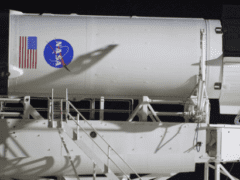 Tomorrow, two NASA astronauts are set to head up into space on a brand new spacecraft, built by the company SpaceX.

The last time NASA sent a crew up in an entirely new vehicle was in 1981 with the launch of the Space Shuttle. Maddie talks to NPR’s Nell Greenfieldboyce about tomorrow’s launch and how it compares to that earlier milestone. We’ll also look at how this public-private partnership is changing the future of space exploration.

This episode was produced by Abby Wendle, edited by Viet Le, and fact-checked by Emily Vaughn.