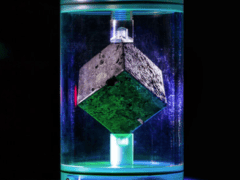 NPR science correspondent Geoff Brumfiel shares the story of Nazi Germany’s attempt to build a nuclear reactor — and how evidence of that effort was almost lost to history.

It’s a tale he heard from Timothy Koeth and Miriam Hiebert at the Department of Materials Science and Engineering at the University of Maryland in College Park. Read more on their original story in Physics Today.

This episode was produced by Brent Baughman and edited by Geoff Brumfiel and Viet Le.