Short Wave: Mars Is The Place To Go This Summer 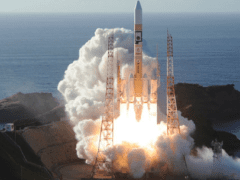 And tomorrow, NASA is scheduled to launch its own mission to the red planet that includes a six-wheeled rover called Perseverance, as well as a tiny helicopter. Short Wave reporter Emily Kwong talks with NPR’s Joe Palca, who explains why these launches are happening now and the goal of the missions when they get there.

Read more of Joe’s reporting on this story here.

This episode was produced and fact-checked by Abby Wendle and edited by Viet Le.