Short Wave: How A 100-Year-Old Treatment Could Help Save Us From Superbugs 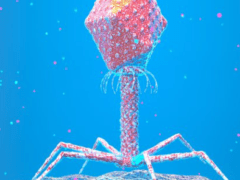 In 2015, Steffanie Strathdee’s husband nearly died from a superbug, an antibiotic resistant bacteria he contracted in Egypt.

Desperate to save him, she reached out to the scientific community for help. What she got back? A 100-year-old treatment that’s considered experimental in the U.S. Strathdee, an infectious disease epidemiologist, tells us how it works, its drawbacks, and its potential role in our fight against superbugs. (Encore episode.)

She also co-wrote the memoir, “The Perfect Predator: A Scientist’s Race to Save Her Husband from a Deadly Superbug.”

This episode was produced by Rebecca Davis, fact-checked by Emily Vaughn and edited by Viet Le.