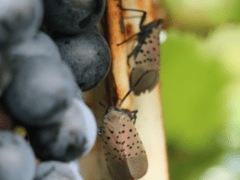 The spotted lanternfly is eating its way through trees and crops in eastern Pennsylvania.

NPR science correspondent Dan Charles explains how scientists hope to stop the spread of this invasive pest by importing a natural enemy from its home in China. Follow host Maddie Sofia on Twitter @maddie_sofia. Email the show at shortwave@npr.org.

Dan’s original NPR report on the spotted lanternfly is here.

This episode was produced by Brent Baughman and Dan Charles and edited by Viet Le.