Short Wave: Farming Releases Carbon From The Earth's Soil Into The Air. Can We Put It Back? 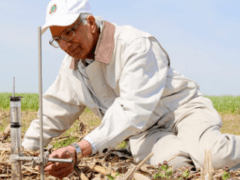 Traditional farming depletes the soil and releases carbon dioxide into the atmosphere.

But decades ago, a scientist named Rattan Lal helped start a movement based on the idea that carbon could be put back into the soil — a practice known today as “regenerative agriculture.”

NPR food and agriculture correspondent Dan Charles explains how it works and why the idea is having a moment.

This episode was produced by Brent Baughman, fact-checked by Emily Kwong, and edited by Geoff Brumfiel.