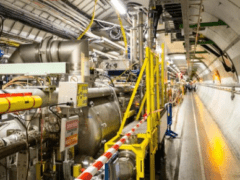 Physicists have known about antimatter for decades.

And they’ve known that, according to the math, there should be just as much of it lurking around the universe as there is matter. But, as NPR correspondent Geoff Brumfiel tells us, so far antimatter has mostly escaped the detection of physicists. (Encore episode)

Plus, email the show at shortwave@npr.org. We love hearing from you.

This episode was edited by Viet Le, and fact-checked by Emily Vaughn.