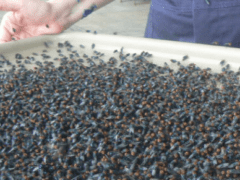 Sarah Zhang wrote about it for the Atlantic: a decades-long scientific operation in Central America that keeps flesh-eating screw worms effectively eradicated from every country north of Panama.

Sarah tells the story of the science behind the effort, and the man who came up with it.

This episode was produced by Brent Baughman, edited by Viet Le and fact-checked by Berly McCoy.