Short Wave: A Brief History (And Some Science) Of Iran's Nuclear Program 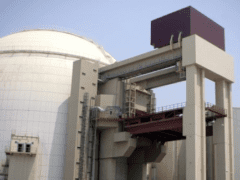 With the Iran nuclear deal in further jeopardy, we take a look at how the country’s nuclear program began with NPR’s Geoff Brumfiel.

(The United States has a surprising role.) We’ll also hear how the 2015 agreement, putting limits on that program, came about, and what it means now that the deal is on life support.

For more on Geoff’s reporting on nuclear weapons, follow Geoff on Twitter — he’s @gbrumfiel or check out his latest stories here.

Plus, you can email the show at shortwave@npr.org.