Short Wave: A Board Game Where Birds (And Science) Win 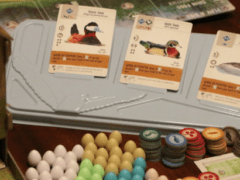 A board game night in 2014 changed Elizabeth Hargrave’s life.

While her friends loved board games, they were tired of the themes — the repetition of games set in Ancient Rome or Medieval Europe. Her husband suggested a board game about birds. Elizabeth ran with the idea. Five years later, Wingspan was published and has since sold 300,000 copies. The game comes with 170 illustrated birds cards, each equipped with a power that reflects that bird’s behavior in nature. Emily Kwong reports on the runaway success of Wingspan and Elizabeth Hargrave’s quest to blend scientific accuracy with modern game design.

As always, you can follow Maddie on Twitter @maddie_sofia and Emily @emilykwong1234. Email the show at shortwave@npr.org.