Short Wave: Chang'e-5 - To The Moon And Back 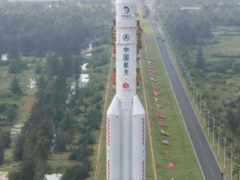 It’s been more than 40 years since rocks from the moon have come back to Earth.

NPR science correspondent Geoff Brumfiel tells us what the mission will tell us about the solar system, and how it foreshadows China’s future ambitions on earth and in space.

This episode was edited by Gisele Grayson, fact-checked by Ariela Zebede, and produced by Thomas Lu. The audio engineer for this episode was Josh Newell.