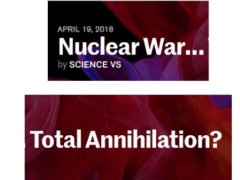 This episode has been produced by Heather Rogers, Wendy Zukerman, our senior producer Kaitlyn Sawrey, Rose Rimler, and Shruti Ravindran, with help from Romilla Karnick. We’re edited by Blythe Terrell. Additional thoughts from Lulu Miller. Fact checking by Michelle Harris. Mix and sound design by Emma Munger. Music written by Bobby Lord and Emma Munger. Thanks for recording help from John Wild. For this episode we also spoke to Prof. Richard Wakeford, Dr. Richard Turco, Prof. Brian Toon, Prof. Alan Robock, Dr. Dale Preston, Dr. William Kennedy, Dr. Jonathan D. Pollack, and a bunch of other experts on North Korea and nuclear weapons. Thank you so much. Also, special thanks to Shigeko Sasamori and Kathleen Sullivan. An extra special thanks to the Zukerman family and Joseph Lavelle Wilson.