Science Vs: The Wank Worm - How NASA Got Hacked 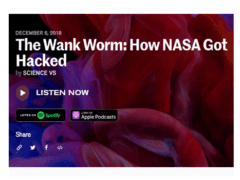 Before WikiLeaks, there was the Wank Worm.

In this week’s episode, we tell you the story of how Australian hackers infiltrated NASA, just months after the country was hooked up to the internet in 1989. Joel Werner, host of Sum of All Parts, helps us tell this story, along with cybersecurity researcher Dr. Suelette Dreyfus.

Check out the transcript here: http://bit.ly/35EkMw5