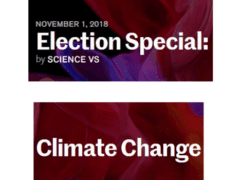 Recently we’ve been warned that climate change is scarier than ever — and that we are to blame.

Yet surveys find around half of Americans don’t think climate change is caused by humans. So how does science know that? And how bad will climate change get? Science Vs has brought this episode up to date so you have the facts for next week’s midterm elections.

Check out the transcript with all the citations, right here: https://scitechinstitute.orgbit.ly/33CGgHY

UPDATE 12/10/20: An earlier version of this episode incorrectly said that Svante Arrhenius came up with the idea that rising carbon dioxide levels could warm the planet. Scientists including Eunice Newton Foote had this idea before Arrhenius. The episode has been updated.