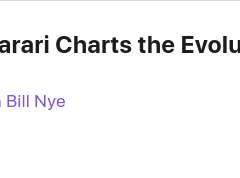 As different as we humans are from each other — politically and otherwise — we’re all part of the same species.

We explore the history of Homo Sapiens and who (or what) might eventually replace us as kings of the forest. See omnystudio.com/listener for privacy information.

Bill Nye is on a mission to change the world — one voicemail at a time.

Bill Nye is on a mission to change the world— one phone call at a time on his new podcast.