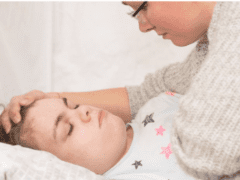 There aren’t many known cases, but the few so far have fueled a federal warning

addiction     A brain disease that makes people unable to give up an unhealthy use of drugs (such as nicotine or opioids) or behaviors (such as game playing or phone texting). The urge to continue these behaviors is so strong, owing to their trigger of reward centers in the brain, that an individual will continue doing them even when they know that they will face severe health or legal consequences.

behavior     The way something, often a person or other organism, acts towards others, or conducts itself.

e-cigarette     (short for electronic cigarette) Battery-powered device that disperses nicotine and other chemicals as tiny airborne particles that users can inhale. They were originally developed as a safer alternative to cigarettes that users could use as they tried to slowly break their addiction to the nicotine in tobacco products. These devices heat up a flavored liquid until it evaporates, producing vapors. People use these devices are known as vapers.

Food and Drug Administration (or FDA)     A part of the U.S. Department of Health and Human Services, FDA is charged with overseeing the safety of many products. For instance, it is responsible for making sure drugs are properly labeled, safe and effective; that cosmetics and food supplements are safe and properly labeled; and that tobacco products are regulated.

link     A connection between two people or things.

nicotine     A colorless, oily chemical produced in tobacco and certain other plants. It creates the “buzz” associated with smoking. Highly addictive, nicotine is the substance that makes it hard for smokers to give up their use of cigarettes. The chemical is also a poison, sometimes used as a pesticide to kill insects and even some invasive snakes or frogs.

pediatrician     A doctor who works in the field of medicine that has to do with children and especially child health.

pharmacology     The study of how chemicals work in the body, often as a way to design new drugs to treat disease. People who work in this field are known as pharmacologists .

seizure     A sudden storm-like surge of electrical activity within the brain. Seizures are often a symptom of epilepsy and may cause dramatic spasming of muscles.

smoking     A term for the deliberate inhalation of tobacco smoke from burning cigarettes.

tobacco     A plant cultivated for its leaves, which many people burn in cigars, cigarettes, and pipes. Tobacco leaves also are sometimes chewed. The main active drug in tobacco leaves is nicotine, a powerful stimulant (and poison).

vape     (v.) The act of inhaling the vapors from an electronic cigarette. (n) Slang for the pen, pod, mod or other type of e-cigarette that someone might use in vaping.